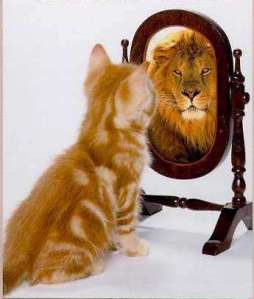 “I believe everything, and I believe nothing” – F.M. Alexander

Many of us don’t make a distinction between our perception of the world around us and reality. We assume that what we see is what is there. That is, until someone or something comes along and makes us realize that what we had held as true is actually false.

When I was a child, I once saw Santa’s back one early Christmas morning as he was making his exit out the front door of my family’s Florida apartment (we had no chimney). I went chasing after him but when I looked outside the apartment he wasn’t there. Magic, I thought. All the proof I needed was the load of presents that had appeared under the tree.

Of course my parents had supplied the presents during the night, but I believed in Santa Claus so he was real to me. So real in fact, that I perceived him in my presence with my own eyes. The same thing happens with our perception of ourselves. If I believe that I have bad posture, for example, I will see just that when I look in the mirror – no matter what shape I take.

For years I was a very reactive, angry person. Even after years of Alexander work had changed my state of reactivity immensely, I still believed (and subsequently perceived that) I was very reactive. It was not until someone told me that the sound of my voice was calming and complimented me for having great patience that I began to change my view. I thought she was joking at first because I had always thought of my voice as an agitated extension of my inner state and I certainly had little patience.

While this insight did not completely change my views in an instant or keep me from continuing to work with my reactivity, it poked a large hole in the dam that was my belief system at the time. Before I perceived the change, it wasn’t real (embodied) to me. I then noticed that the more my beliefs about who I was changed, the more I perceived change, and the more easily I actually changed. Who I wanted to be was no longer fighting against who I thought I was.

It is very important to remember that how we see the world has less to do with what is actually there than what we have decided is there. The brain receives some information through the sensory mechanisms, but then must fill in the blanks. This is where our belief systems come into play. If we are Theistic, for example, we will see things through that framework and that is real to us. When hurricane Katrina hit New Orleans many believed it was an act of god to cleanse the evil that resided there. Whether you believe this — or that the hurricane was caused by a tropical depression — doesn’t matter because either will be real to you if you believe them. They can co-exist.

What Alexander discovered was that poor use of the body was causing what he called “faulty sensory awareness” and “debauched kinestesia.” In other words the information received by his brain from his sensory mechanisms was being disrupted by excess muscle tension and misalignment; causing his perception of what was happening and what he was doing to be inaccurate. The Alexander Technique improves your awareness of reality by removing the blockages of information between brain and sensory organs. In addition, the AT indirectly allows us to observe without judgment, letting our habitual belief system take a vacation by taking us out of our habitual state of being. Without the later step, there is no room for change. F.M. once said that “Belief is a matter of customary muscle tension.” Similar to what Wilhelm Reich called “character armoring”, our beliefs (another habitual response to stimuli) are literally held in the muscle memory. This is why change is a slow process: the mind makes a decision but the body must be taught to work with the new belief system (or lack thereof).

One thought on “Perception & Reality: A two-way street”